LED electronic information displays (panels) are one of the most effective information and warning tools in the present. It is possible to show information on the availability of parking spaces in the parking area, the temperature and surface roadway surface, and temperature as well as the date and time, promotions in the shop, pertinent exchange rates, and many more things using LED displays.

You can display type of text or digital or graphic information (relevant to wire or wireless synchronization of communication currently) on these screens.

The multimedia functions permit the display of information using graphics, special effects, and the possibility of information repeating on a time-based basis and the day of the week, or the date.

The configuration of the industrial touch pcs operation modes and changing the text information displayed on the display is performed on any computer that includes the software set. The panel management program is a simple one that requires basic skills for computer work at the beginning stage: Windows and Word.

Chemists, shopping centers car parking, manufacturing workshops logistic centers hotels, stations, hotels, and airports, all public institutions are a short list of the spheres in which there is a possibility to use the LED board.

We provide LED displays, as well as the seven segments, displayed in any size and color. protection classes for streets and rooms A variety of operation modes and methods of displaying are provided by our panel LED:

The LED’s power source based on the operation mode ranges between 4 and 15 years.

The maximum height and width of figures based on the technology that can be implemented are between 60 and 100 cm.

Provide seven segment displays to our customers, that are built for machines, devices production lines — wherever they’ll be used or implemented as thin cases which have the necessary dimensions for your needs. We can manufacture these cases in consideration of the external environment, and where they are used specifically, they are made from fire-resistant plastic and provide the required level of protection such as IP64, and IP65.

To facilitate mounting, we have the most appropriate mounting fastener for greater security and comfort during system operation.

We attach significant importance to designing and executing both segments, as well as the instances within which the segments are incorporated. We are constantly in search of innovative solutions to esthetic issues to ensure that the displays not only fulfill their fundamental job but also are well-suited to the aesthetic integrity of the space in which they are placed. The touchscreen displays that came out in the 70s of the century before allow to incorporate the input system of a single device with a screen system.

The touchscreen display (or panel) usually is mounted over an LCD panel. The touch screens that are the largest present are resistive and have multiple panels. Each offers advantages and benefits of use.

Displays that display that resistive (“resisting”) display respond to contact with a certain amount of. Two plates of metal that are powered by electricity by the display are responsible for determining clicking on this display. They are placed at short distances from one another directly below the screen. When you touch the display with your stylus or your finger the upper one bends and can touch the lower. Coordinates are read out and then sent to processing. It happens quickly due to the latest logical chips, the action takes place for a few minutes. Resistive displays are relatively inexpensive. They can be used with them using any solid object.

Multiple displays differ from resistive ones. Everybody can see the distinction. It isn’t necessary to do a lot of work for successful work using many sensors. It is enough to lightly touch a sensitive object and a click is processed. The transparent conduction elements situated over the largest LCDs are accountable for determining precise coordinates (it is also powered).

The human body has an electrical charge. When it is touched with your using your hand, a charge of the common ground shifts. The controller tracks what location the charge changed and then sends the information into the system to process. Multiple displays are efficient, however, you must touch them with your hands. they cannot discern clicking with the stylus, and they are not responsive to a finger placed in gloves at all.

Touch multiple screens permit recognition of multiple locations that contact (multi-fingers) or any point of contact simultaneously (multi-touch).
Our company is prepared to design your project touchscreen monitors (or on request, do not touch) colored screens that have different technical parameters. About a range (industrial automation and measuring equipment as well as medical equipment and screen displays for information), we attempt to design with the view from which we can achieve the best interaction between the device and operator.
Displays are divided into various types based on the technology used to produce them as well as the constructions, and optical and electrical properties. The broad range of kinds, as well as controls, allow users to select the most suitable versions. We’d like to provide you with the most useful kinds. Active matrixes are identified with the abbreviations”TFT” (Thin Film Transistor). It’s the technology used by thin film transistors, that is used in action as well as matrix display. Three transistors (each of which is one of three colors – green, red or blue), as well as the condenser that provides required voltages, are the basis of each pixel on the image.

This technology is a spiral arrangement of crystals. These in the case of potential that is strong can rotate so that the screen is black. In the absence of the retention of large power, we will see a screen as white. The principle of matrix operation is the control of the intensity of the luminous flux through its Polarization. The polarization change is performed by liquid crystals based on the electric field that is attached to them. The possibility exists to enhance significantly the speed of the  and improve the clarity and contrast of the image when compared to normal liquid crystals that are passive using the active matrix that is controlled by transistors made of the thin film. One of the most basic matrix technology. film and TN is the layer that is added to provide visibility of 90-170 degrees in the horizontal direction, and 65-160 degrees in the vertical direction. The film is frequently not mentioned in the name and is often referred to as displays with TN. They are less expensive. Because the image isn’t optimal on these screens when angles of viewing and the color rendering are also inferior in comparison to displays that use OLED and OLED.

TN matrix displays have a high speed of response – the time needed for the pixel to adjust its brightness. Additionally, TN displays are low in terms of energy usage and long-lasting.

It is one of the forms of the TFT matrix. The technology of matrix used in the LCD screen with IPS (In-Plane switching) refers to the that crystals are arranged in parallel across the entire surface of the monitor. There are no spirals in this instance. Thus, crystals under conditions of high potential don’t change. Also, the IPS technology functions more than the upgraded TFT. It shows black colors better, which increases the degree of contrast and brightness. Because of this, it is more expensive as opposed to traditional TFT.

The way black color is industrial touch display directly affects the contrast of the image. If the screen is tilted with TFT technology but without IPS, then it will be virtually impossible to read. The reason for this is that the screen that is inclined would be completely black. If we consider the IPS matrix, due to the reason that the transfer to black colors is achieved through crystals, the image will be extremely precise.

The TN-TFT matrix loses the color image because every pixel has its distinct shade, which results in distortion in color. The screen equipped with IPS technology transfers images far more efficiently.

One of the benefits of TN-TFT screens over IPS is their speedy response. Since IPS takes a long time to turn parallel crystals. We could conclude that in cases where the speed of plotting is of great importance, it is preferential to select a display with the TN matrix. Displays using IPS technology operate more slowly but they’re not visible to the naked eye. It is also possible to see this difference only after applying the scientific tests specifically designed to test this.

Displays using IPS technology, which differs from TN-TFT displays, require more energy. This is because, for parallel crystals to rotate, massive potential is needed. This means that the battery can handle more load than when using TFT in the matrix. If you require the device to be powered by an internal power source with a low power consumption then the traditional TFT technology is the better choice. OLED ( Organic Light Emitting Diodes) Electroluminescent displays are made of organic light-emitting semiconductors. The primary differentiator is that illumination lamps aren’t required. Surface elements shine in the latest display screens. They shine much brighter as displays with LCDs (100000 cm2). In the same way, they consume less energy The color rendering is superior and the contrast is greater (300:1) and the viewing angle is larger (up to 180 degrees) as well as the coverage of colors is greater. In contrast to the standard LCD, the organic material can respond 100-1000 times faster.

The thickness of the display should not exceed 1 millimeter (taking into consideration the 2 mm cover plate) The weight is determined by grams. A crucial parameter is the operational temperature range: ranging from -30 to 60 degrees. Due to the lack of good quality, you can show the existence of a relatively short lifetime (about 5000-8000 hours). How do organic screens are laid out? The researchers of luminescent diodes discovered that when you combine two layers of specific organic substances and then traverse them with a single point, an electric current will flow through them and luminescence would appear at the area or location. In addition, with different materials and filters, it is possible to get various colors. Some OLEDs operate passively and active matrixes. The basic principle of operation of matrixes is identical, but it uses a layer of organic semiconductors instead Liquid Crystals Layer.

If we compare modern OLED displays and older LCD screens, the result will not favor the latter LCDs operating to the limits of their potential The speed at which frames change on screen is very low and the power consumption tends to the screen to wish for smaller. It’s hard to see anything in daylight on LCD screens They are extremely brittle.

Organic display technology eliminates virtually all flaws that are typical of LCDs. Additionally, it gives the best characteristics that the picture.

Physically organic electroluminescent displays are displayed that are made up of very thin organic film in between two conductors. By feeding these conductors, the tiny voltage (about 2-8 voltages) will also cause the display to emit light. The foundation for the OLED matrix is made up of polymeric materials. Their constant development to no small degree improves display quality and advancement of manufacturing techniques for matrix. 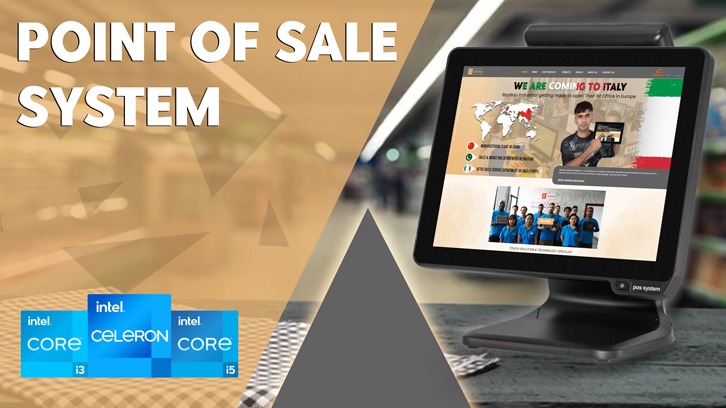 Why You Need a POS System for Your Business 2022